Dry trend continues with a big warm up for the second half of the week. Today with a few clouds the high reached 63°, several degrees below the average of 69. Tonight, expect widespread frost, with some areas over eastern Middle Tennessee getting down to freezing.  A Frost Advisory is in effect for much of Middle Tennessee from 1AM to 8AM in the pink. Freeze Warning, in the purple, is in effect for a few counties in southern Kentucky. 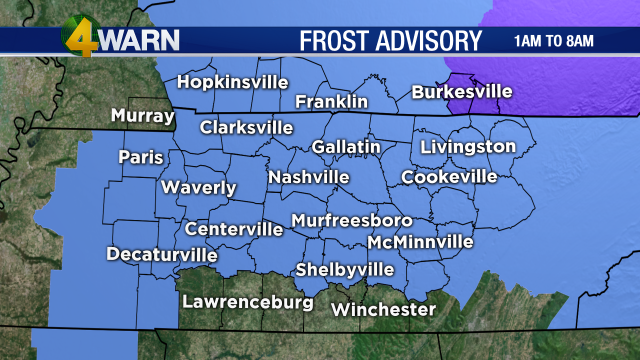 Tomorrow, a southwesterly wind will develop, allowing temperatures to climb into the upper 60s. You’ll need the shades as it will be a beautiful sunny afternoon.

The shorts may come out in full force Thursday and Friday. It will both be breezy, if not windy. Highs will be near 80.

Scattered thunderstorms are likely on Saturday, they are not expected to be severe at this time. Temperatures will be in the 70s.

We’ll have lingering showers and cooler air on Sunday. Monday looks chilly, with highs in the 50s.

Sky watchers… the International Space Station will pass by again tonight, twice.  But tomorrow night will be better. Here are the details.

Lisa Spencer is the chief meteorologist at WSMV Channel 4 Nashville. You can catch her weathercasts weekdays at 4pm, 5pm, 6pm, 6:30pm and 10pm.
View all posts by Lisa Spencer →
This entry was posted in Uncategorized. Bookmark the permalink.
Loading Comments...
Comment
×
%d bloggers like this: