A 4WARN Weather Alert remains in effect through Sunday.  Flash flooding and severe thunderstorms are likely in Middle Tennessee.

Flooding is in progress now (as of 10:55am) over southwest Kentucky.  A Flood Warning is in effect there until 3:45pm due to heavy rain last night and this morning.  On the map below, the data show how much rain has fallen over the last 24 hours.

Notice we’ll have showers developing this afternoon over our northwestern counties, a few of which could even try to move through the Nashville area.

High temperatures this afternoon will be in the 70s. 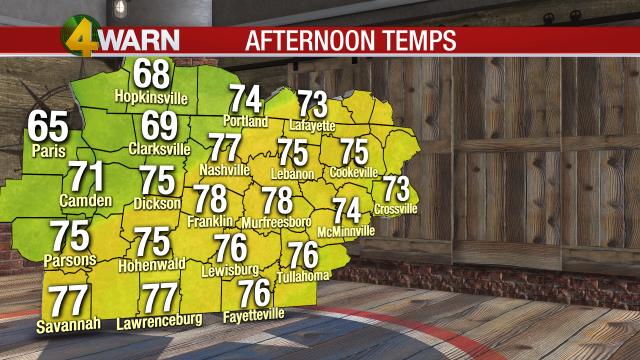 A Flood Watch continues through Sunday morning as more rain is expected in waves this weekend.

Another wave of rain will move in from the south tonight.

Tomorrow will be windy, warm, and humid with more spotty showers.

Then tomorrow evening, scattered strong-severe thunderstorms will move in from the west.  The mostly likely time for severe weather is early tomorrow evening around Nashville.  The strongest storms will occur along the Tennessee River.  Severe storms are less likely farther east over the Cumberland Plateau.  Flooding there though remains a threat.

Be sure to check back in frequently with us at News4 both today and tomorrow as some fluctuations in the expected storm arrival time is likely.

Also, once rain clears the area Sunday be extra vigilant for flooding as many creeks, streams, and rivers will be rising then.

This entry was posted in Uncategorized. Bookmark the permalink.