Posted on September 7, 2017 by daphnedeloren

Refreshing blue skies, crisp air and temperatures as low as the lower 40s for some this morning. Here’s a peak out our Saint Henry school cam at 9:00 AM this morning…not a cloud in sight.

It will feel very similar to yesterday with daytime highs around the lower 70-degree range. Average is 86 for this time of year…

While things are quiet here, Hurricane Irma brings devastation (to say in the least) to others…

Moving WNW AT 17 mph with maximum sustained winds of 180 mph, Hurricane Irma remains a catastrophic category 5 hurricane. Just to give you an idea…the most powerful hurricane on record in the Atlantic. The organized eye wall is currently tracking just north of the Dominican Republic with initial bands moving into Haiti. Cuba will be next in the running by early Friday morning. As I expected, the path of the storm looks to push further east, making potential landfall across the southern most tip of FL by Sunday morning. Irma is than expected to continue tracking north northeast, back out to the Atlantic before potentially impacting the Atlantic coast along Georgia and South Carolina.

There’s still time for Irma to push even further east into the Atlantic ocean which would be the better case scenario. Any case, I’m confident FL will see significant impacts from this major hurricane. 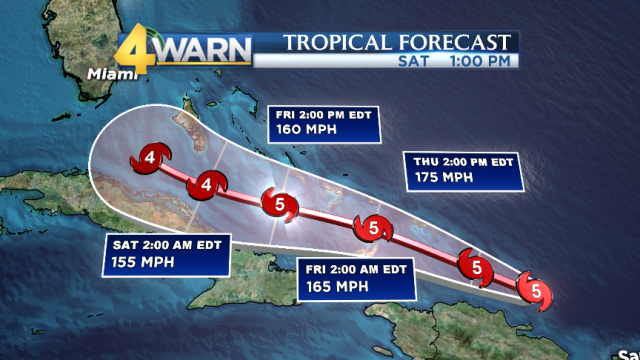 Here’s a few snaps from my family (mom, dad, grandma and uncle) — deciding the risk of running out of gas on the road was less than staying at home, where Hurricane Irma is expected to make landfall. They got on the road 1 AM this morning with close to bumper to bumper movement on I-95. Slowly but surely move north and AWAY!

Surprisingly, this is how their stop for gas turned out, which was quite the opposite for most FL evacuates struggling to find gas, hopping from  station to station.

My sister and her family decided to stay and outweigh the storm. As you can imagine, her meteorologist sister has a major concern with it. Continued prayers…

All eyes are on this storm and we will continue to give you the latest as updates come into the 4WARN Weather center. I’ve had questions about potential impact of Irma in the Mid State. It’s still too soon o map out the timing of rain Irma tracks far enough to even provide rain. As of now, if I had to give a time frame, I would point towards Tuesday into Wednesday, with eastern Middle Tennessee getting the bulk of the rain as the storm will be well east of Tennessee. Irma could push further east, which could take rain chances completely out of our forecast. I’ll keep you posted as time gets closer. For now, get outside and soak this 7-Day up!

Make it a great day!