Weekend Looking Better than Before

We all know the weather forecast changes from time to time.  It has to.  The atmosphere is far too vast and complex, even in this day and age, for meteorologists to sing the same song perfectly consistently about weather for an upcoming day or event.  This weekend is one of those times.

Earlier in the week, it looked like scattered showers and thunderstorms would be a BIG part of our weekend outlook.  Now…not so much.

This morning (as of 9am), it’s variably cloudy, warm, and muggy.  Temperatures are running in the 70s and lowermost 80s.

A few showers have formed on and near the Cumberland Plateau, as shown on 4WARN Live Doppler Radar.

Later today, showers and thunderstorms will become more widespread in coverage, as a cold front now over the Plains states closer to Middle Tennessee. 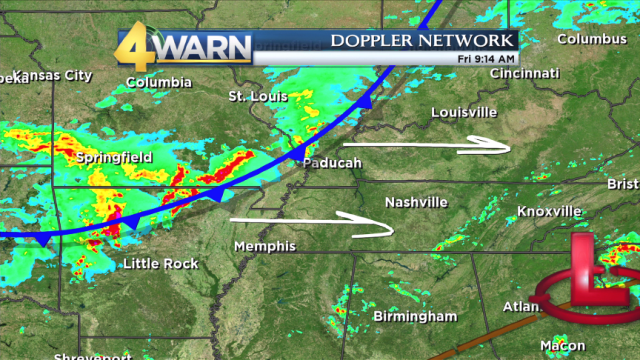 FUTURECAST shows the increase in rain coverage as we get into the afternoon.  Widely scattered rain and storms will linger into tonight, although over time, they’ll gradually diminish.

Tomorrow, the best rain chance will be along and south of Interstate 40.  During the afternoon, as slightly drier air funnels in, some folks especially over southern Kentucky will notice the humidity coming down slightly, in the wake of a weak cold front.

Much of Sunday looks excellent!  Then, late Sunday afternoon or Sunday night, another weather system will begin to move into Middle Tennessee from the west.  That’ll bring another round of rain and thunderstorms, many of which will linger into Monday morning, for the commute.

Coming up on News 4 at Noon today….we’ll talk more about this weekend.  PLUS, I’ll share a bunch of fun things to do outdoors this weekend, so you can take advantage of the relatively nice weather we expect.

Hope you join us then!