June 1: Looking Back at May, Ahead to June

Happy “meteorological summer”!  Summer officially arrives the evening of June 20, but the weather community rounds things off to June 1 because it just makes more sense.  Now that the month of May and “meteorological spring” are in the books, we can look back at some of the data.

May 2017 was a pretty normal month, with the average temperature running just 1.9° above-normal. But spring (March-April-May) was still the 3rd-warmest on record in Nashville, dating back to the 1870s…only 2012 and 1991 were warmer.  2017 is off to THE warmest start on record, by about a half-degree — doesn’t sound like much, but it’s quite significant when you’re talking about 151 days of data over 143 years.

Out of the last 24 months, 22 recorded above-average temperatures in Nashville.  In those 2 years, only January 2016 (slightly below-normal) and May 2016 (barely above-normal) were essentially “average.”  August 2015 was the last unequivocally “cool” month.

CPC doesn’t anticipate the below-average temperatures to last all summer, though — the outlook for June-July-August is for above-normal temperatures once all the data is added up this summer:

Okay, that’s plenty of big-picture stuff…let’s talk about our weather around here for the next few days.  We had a few thundershowers in southern Kentucky this morning, and spotty storms will be possible again this afternoon — the HRRR model’s radar simulation shows the best chance developing along I-40…but even then it’s spotty activity:

Temperatures will still warm up to the mid to upper 80s in between the storms:

I’m not overly concerned about severe weather today (even less so tomorrow and Saturday), but there’s always an outside chance of an isolated storm or two reaching marginally severe limits: 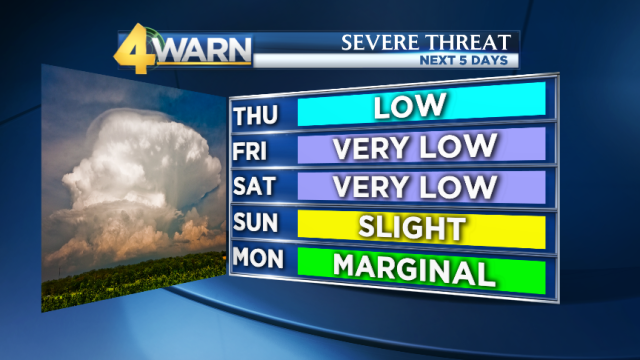 Just an isolated storm chance in the forecast Friday and Saturday, but that means it will be even warmer, with highs around 90° both days.  The best chance of storms in the forecast arrives on Sunday, and could linger into Monday as well:

We’ll dry out by the middle of next week, with comfortable temperatures and much lower humidity Tuesday and Wednesday.

Morning meteorologist for WNCN-TV in Raleigh.
View all posts by paulheggen33 →
This entry was posted in Uncategorized and tagged climate data, daily forecast, links. Bookmark the permalink.

1 Response to June 1: Looking Back at May, Ahead to June