Early-morning showers have mostly dissipated, leaving us with a few breaks in the clouds from late morning into early afternoon. Temperatures will warm up to the upper 70s, with just a limited rain chance through early afternoon: 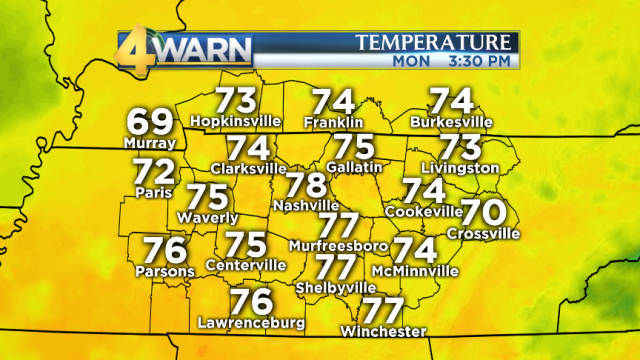 Another good chance of showers and non-severe storms will develop by this afternoon and this evening…the specific timing for the Midstate depends on what storms in Arkansas this morning decide to do:

If those storms hold together as they cross the Mississippi River, they’d move into western Middle Tennessee already by early afternoon, spreading across the rest of the Midstate by mid- to late-afternoon.  But at this point, I don’t think that’s the most-likely scenario.  I think the storms out west will fizzle, then the atmospheric ripple that caused them will spark some showers and storms closer to home by late afternoon and evening:

The HRRR model’s radar simulation is in rough agreement with that scenario:

If you’re planning on heading down to the Bridgestone plaza for the Predators’ pre-game festivities, be ready to scurry for cover if the showers and storms approach at that time:

Whether it’s the Preds’ plaza party, the Sounds’ game this evening, or any other outdoor plans, the same advice applies: stay plugged-into the forecast for potential timing changes — this is a loosely-organized system, which makes it hard to pin down the specifics.  The good news is that our severe weather potential will be low: 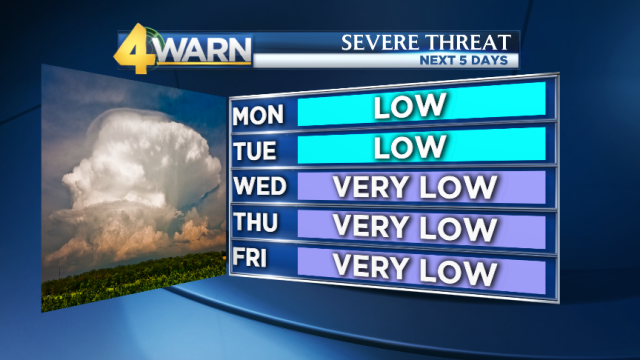 More scattered showers and storms in the forecast Tuesday…once again it will be hit-and-miss activity, and once again temperatures will top out in the upper 70s: 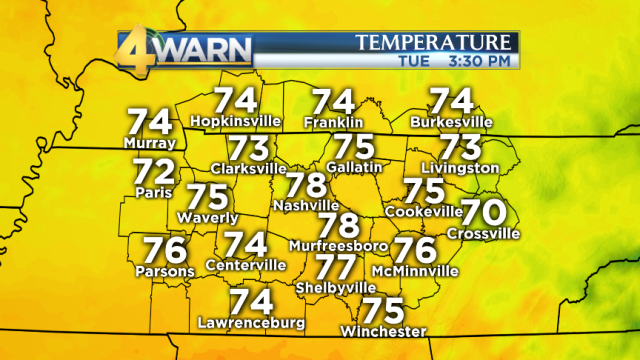 A drier forecast Wednesday and Thursday — highs will reach the low 80s:

We could see some stronger storms late Saturday, but that’s a long way off in the forecast at this point.  Like the last several systems, it looks like the wind energy will be supportive of severe storms, but there may not be enough instability for the threat to become reality.  We’ll keep you updated as the week progresses.

Morning meteorologist for WNCN-TV in Raleigh.
View all posts by paulheggen33 →
This entry was posted in Uncategorized and tagged daily forecast, links. Bookmark the permalink.
%d bloggers like this: